The president of a prominent Alzheimer’s research organization asked me to collaborate with the organization’s chairman - a prominent neuroscientist - to conceptualize and produce a series of biomedical illustrations to be published in a monograph and made available to both the lay and scientific community. The monograph would contain an introductory section describing genes and protein synthesis, and more detailed sections explaining the latest scientific breakthroughs and potential new therapies for Alzheimer’s disease. The initial challenge included deciding:

1. which sections of the monograph needed explanatory visuals; and

2. how to translate concepts, which existed in very complex word slides and research papers, into clear yet content-rich images that would be appreciated by both a lay audience and the scientific community.

After being informed of the budget and timeline for production of the images, I facilitated a series of conference calls with the organization’s president and marketing director and the neuroscientist. Subsequent one-on-one meetings with the neuroscientist enabled me to rough out the concepts that needed to be illustrated and formulate visual approaches for explaining the organization’s research and conceptual processes. As a result of this collaborative process, I generated preliminary visuals of the organization's important research activities and then refined these rough sketches into more polished line drawings. After further discussion and review, I proceeded to produce the finished full color images.

The organization, and the neuroscientist and his team, were extremely pleased with the final images, which became an integral component of a document that described effective therapies being developed to treat Alzheimer’s disease.

The foundation for creating a successful marketing tool is the collaborative process. By listening, asking questions, and engaging in an ongoing dialogue with a client, I am able to craft visual solutions for communicating complex concepts. 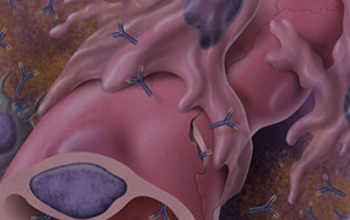